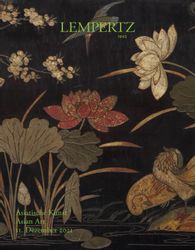 Commercial Code as commissioning agent on behalf of the accounts of submitters,

who remain anonymous. With regard to its auctioneering terms and conditions

drawn up in other languages, the German version remains the official one.

2. The auctioneer reserves the right to divide or combine any catalogue lots or, if it

has special reason to do so, to offer any lot for sale in an order different from that

given in the catalogue or to withdraw any lot from the sale.

3. All lots put up for sale may be viewed and inspected prior to the auction. The

have both been compiled in good conscience, do not form part of the contractually

agreed to conditions. These specifications have been derived from the status of the

information available at the time of compiling the catalogue. They do not serve as a

guarantee in legal terms and their purpose is purely in the information they provide.

The same applies to any reports on an item’s condition or any other information,

either in oral or written form. Certificates or certifications from artists, their estates

are specifically mentioned in the catalogue text. The state of the item is generally not

mentioned in the catalogue. Likewise missing specifications do not constitute an

agreement on quality. All items are used goods.

4. Warranty claims are excluded. In the event of variances from the catalogue descriptions,

which result in negation or substantial diminution of value or suitability,

and which are reported with due justification within one year after handover,

courts; in the event of a successful claim against the seller, Lempertz will reimburse

the buyer only the total purchase price paid. Over and above this, Lempertz undertakes

of the sale if the object in question proves not to be authentic.

5. Claims for compensation as the result of a fault or defect in the object auctioned

or damage to it or its loss, regardless of the legal grounds, or as the result of variances

due dilligence according to §§ 41 ff. KGSG are excluded unless Lempertz acted with

wilful intent or gross negligence; the liability for bodily injury or damages caused to

health or life remains unaffected. In other regards, point 4 applies.

6. Submission of bids. Lempertz reserves the right to approve bidders for the auction

in terms of § 1 para. 3 GWG. Bids in attendance: The floor bidder receives

a bidding number on presentation of a photo ID. If the bidder is not known to

Lempertz, registration must take place 24 hours before the auction is due to begin in

writing on presentation of a current bank reference. Bids in absentia: Bids can also

be submitted either in writing, telephonically or via the internet. The placing of bids

processing thereof. The item must be mentioned in the bid placed, together with the

lot number and item description. In the event of ambiguities, the listed lot number

becomes applicable. The placement of a bid must be signed by the applicant. The

long distance agreements (§ 312b-d of the Civil Code) do not apply. Telephone bids:

Establishing and maintaining a connection cannot be vouched for. In submitting

a bid placement, the bidder declares that he agrees to the recording of the bidding

process. Bids via the internet: They will only be accepted by Lempertz if the bidder

registered himself on the internet website beforehand. Lempertz will treat such bids

in the same way as bids in writing.

7. Carrying out the auction: The hammer will come down when no higher bids are

submitted after three calls for a bid. In extenuating circumstances, the auctioneer

reserves the right to bring down the hammer or he can refuse to accept a bid, especially

when the bidder cannot be successfully identified in terms of § 1 para. 3 GWG.

If several individuals make the same bid at the same time, and after the third call,

no higher bid ensues, then the ticket becomes the deciding factor. The auctioneer

that was submitted on time, was erroneously overlooked and immediately queried

by the bidder, or if any doubts regarding its acceptance arise. Written bids are only

another bid. The auctioneer can bid on behalf of the submitter up to the agreed

limit, without revealing this and irrespective of whether other bids are submitted.

Even if bids have been placed and the hammer has not come down, the auctioneer

is only liable to the bidder in the event of premeditation or gross negligence.

8. Once a lot has been knocked down, the successful bidder is obliged to buy it. If

a bid is accepted conditionally, the bidder is bound by his bid until four weeks after

the auction unless he immediately withdraws from the conditionally accepted bid.

From the fall of the hammer, possession and risk pass directly to the buyer, while

ownership passes to the buyer only after full payment has been received.

price plus 19 % value added tax (VAT) calculated on the premium only is levied.

On lots which are characterized by N, an additional 7 % for import tax will be

On lots which are characterized by an R, the buyer shall pay the statutory VAT of

19 % on the hammer price and the buyer’s premium (regular scheme).

Exports to third (i.e. non-EU) countries will be exempt from VAT, and so will be exports

number. For original works of art, whose authors are either still alive or deceased

be levied for the droit de suite. The maximum charge is € 12,500. For payments which

ID of the buyer according to §3 of the German Money Laundry Act (GWG). This

applies also to cases in which payments of EUR 10,000.00 or more are being made

for more than one invoice. If a buyer exports an object to a third country personally,

the VAT will be refunded, as soon as Lempertz receives the export and import

papers. All invoices issued on the day of auction or soon after remain under provision.

10. Successful bidders shall forthwith upon the purchase pay to Lempertz the final

price (hammer price plus premium and VAT) in Euro. Bank transfers are to be

exclusively in Euros. The request for an alteration of an auction invoice, e.g. to a person

other than the bidder has to be made immediately after the auction. Lempertz

however reserves the right to refuse such a request if it is deemed appropriate. The

transfer is subject to successful identification (§ 1 para. 3 GWG) of the bidder and of

the person to whom the invoice is transferred. Invoices will only be issued to those

11. In the case of payment default, Lempertz will charge 1% interest on the outstanding

amount of the gross price per month.. If the buyer defaults in payment,

Lempertz may at its discretion insist on performance of the purchase contract or,

after allowing a period of grace, claim damages instead of performance. In the latter

case, Lempertz may determine the amount of the damages by putting the lot or lots

up for auction again, in which case the defaulting buyer will bear the amount of any

reduction in the proceeds compared with the earlier auction, plus the cost of resale,

12. Buyers must take charge of their purchases immediately after the auction. Once

a lot has been sold, the auctioneer is liable only for wilful intent or gross negligence.

Lots will not, however, be surrendered to buyers until full payment has been received.

Without exception, shipment will be at the expense and risk of the buyer.

a freight agent. If Lempertz stores such items itself, it will charge 1 % of the hammer

price for insurance and storage costs.

13. As far as this can be agreed, the place of performance and jurisdiction is Cologne.

German law applies; the German law for the protection of cultural goods applies;

Sale of Goods (CISG) are not applicable. Should any provision herein be wholly

or partially ineffective, this will not affect the validity of the remaining provisions.

Regarding the treatment of personal data, we would like to point out the data protection